La Tomatina, one of Spain’s largest events, is greatly anticipated in Buol, Valencia. Every year, hundreds of people go out to take part in a peaceful tomato battle that results in a tomato sauce-covered street. Even though it is a “sticky” event, everyone should experience it at least once in their lives since it is a lot of fun. It is perhaps the best argument for visiting Spain and enjoying your holiday to the fullest. 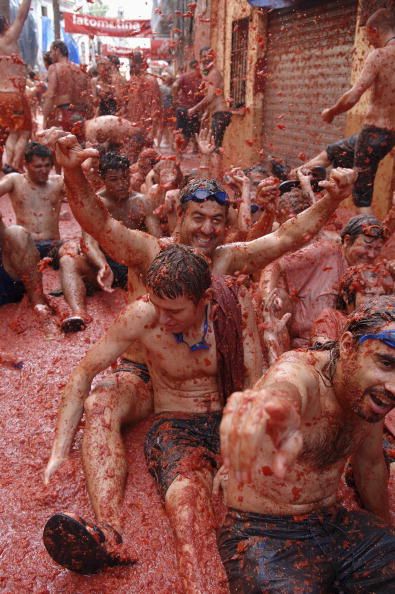 As part of this fruit-based festival, hundreds of thousands of visitors engage in a comical tomato fight by tossing overripe tomatoes at one another on the last Wednesday in August. When a group of kids were frustrated with the way a neighborhood march was going, they decided to celebrate this festival for the first time in 1945. They decided to do this by making a place for themselves on the march’s staff. At that very moment, one of the participants tripped and fell, and in his following rage, he crashed into everything in his path, including a number of ripe tomatoes from a nearby fruit stand. After a while, others began to smash tomatoes in a similar manner to this person, but their motivation was enjoyment rather than rage.

Despite being forbidden for a while, the government finally permitted this festivity, which is today known as La “Tomatina de Buol.” It is categorized as a Festival of International Tourist Interest by the General Secretariat of Tourism in Spain. If you think it’s bad that so many tomatoes go to waste, we have excellent news for you. You may easily estimate what degree of consumption is anticipated given how well-known Spain is for its juicy and delectable tomatoes. Therefore, you can be sure that they are all of low quality and utilized for the La Tomatina Festival.