Known for its fascinating ancient cave dwellings which have been inhabited since the Paleolithic period, Sassi di Matera is located in the southwest portion of Italy. Originating from a prehistoric troglodyte settlement, this complex of houses, churches, monasteries and hermitages built into the natural caves of the Murgia is believed to be one of the first human settlements in the country. With evidence of inhabitants living in the area since the year 7000 BC, this ancient town expanded on the edge of a steep ravine and its houses have been dug into the calcarenite rock that is characteristic of the Basilicata area.

Walking on the intricate maze of streets and staircases in Sassi is like stepping into a time machine. Formed 9,000 years ago, these cave dwellings are considered the longest-occupied ones in world history. Over the years, Ancient Romans, Greeks, Byzantines, and several others have passed through Sassi, leaving behind their antique artifacts and cave paintings. The area is also home to the Crypt of the Original Sin, a cave adorned with thousand-year-old Biblical frescoes which has also become known as “The Sistine Chapel of Rupestrian Art.” 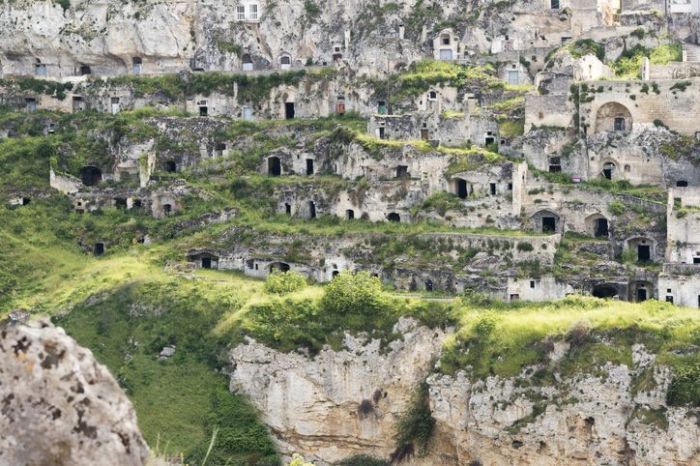 Throughout its millennia-long existence, the town has overcome its poverty-stricken years and is now a tourist destination, as well as a UNESCO World Heritage Site. Since the late 20th century, when Sassi has received access to electricity and running water, the city has updated its buildings to better accommodate its residents and guests. While the ancient caves do house restaurants and boutique hotels nowadays, the Sassi lifestyle and appearance have remained the same.