Life In The Most Remote Settlement In The World

Have you ever felt the need to escape from society for just a bit? Are you a thrill-seeker? Are you cool with active volcanoes? If you answered yes to all these questions, we’ve found just the right travel destination for you. Because apparently, there is a tiny settlement just 1,700 miles from the coast of Capetown, South Africa that’s recently been dubbed the most remote settlement in the world. And it just so happens to be located on an active volcanic island.

Edinburgh of the Seven Seas, the most isolated settlement in the world, can only be reached after a week-long boat trip from Capetown, one South Africa’s three capital cities. The settlement boasts less than 300 residents and sits on the island of Tristan da Cunha, an active volcanic island in the middle of the South Atlantic Ocean. Located 6,500 feet above sea level, the island is one of Britain’s 14 overseas territories. The last time the volcano erupted was in 1961, an occurrence which forced the local islanders to evacuate to England. The settlement was given its unique name after the Duke of Edinburgh, the second son of Queen Victoria, who visited the island in 1867. 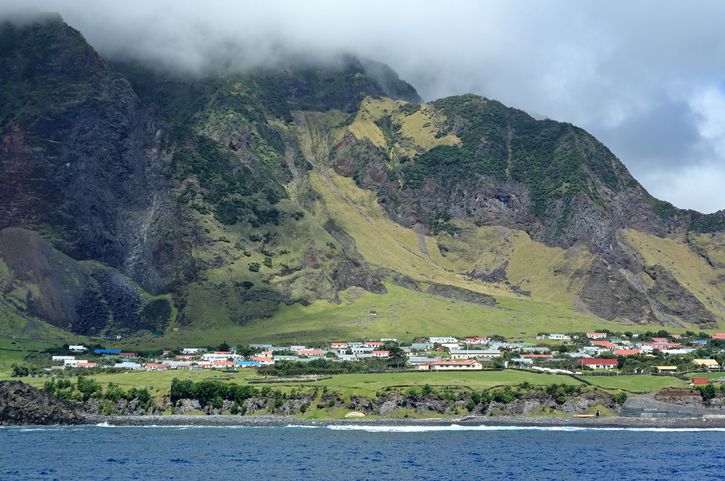 Life in the most remote settlement on earth has its benefits. The island’s remoteness guarantees its residents a level of safety and tranquility that’s hard to find anywhere else. Their economy is dependent upon the export of crawfish, also known as “Tristan Rock Lobster”, as well as tourism. While there are no hotels yet on the island, there is a homestay program for eager tourists. The nearly 300 residents on the island are made up of three groups: descendants of the island’s original settlers, researchers who are stationed there, and visitors.

Although Edinburgh of the Seven Seas depends on its tourism industry, planning a trip to the island isn’t easy. Because it’s so remote, the government recommends that you start planning your trip years in advance. There is also an application process one has to go through in order to visit the island. Before receiving approval to vacation there, you will need to provide your reasons for travel, as well as what you plan to do during your stay there. All in all, a stay at this remote settlement involves a lot of planning, but for those looking for a unique and peaceful getaway, it will be more than worth it.