Everybody loves singing in the rain. However, there are some uber-talented people who enjoy both singing and dancing in the rain. American pop singers Lady Gaga and Ariana Grande clearly fall into this latter category, as proven by the release of the music video for Gaga’s latest single “Rain On Me”, which features vocals by Grande. The powerful duo dropped the catch track a few weeks ago, and cheekily let fans know that a music video was on its way. “#RainOnMe u better wake up and get some coffee for that hangover cuz the video is out,” Gaga wrote on her Twitter account.

The girl-power themed song is equal parts futuristic and inspirational, and the accompanying music video for “Rain On Me” definitely measures up to the track. In the video, both Grande and Gaga move to the beat with their dance crews, while rain and knives pour down upon them from the grey skies. As for costumes, the two pop queens definitely don’t disappoint with their ensembles. Gaga is dressed in what can only be described as true Gaga fashion, sporting a fierce pink and black latex bodysuit. Meanwhile, Grande opts for a more girly look, accessorizing her look with butterfly wings and her signature high ponytail hairdo. The video starts out with the two stars and their crews in what appears to be different realms, each one characterized by its own color. By the end of the clip, Gaga and Grande join together just in time for the chorus lyrics, “I’d rather be dry but at least I’m alive.” 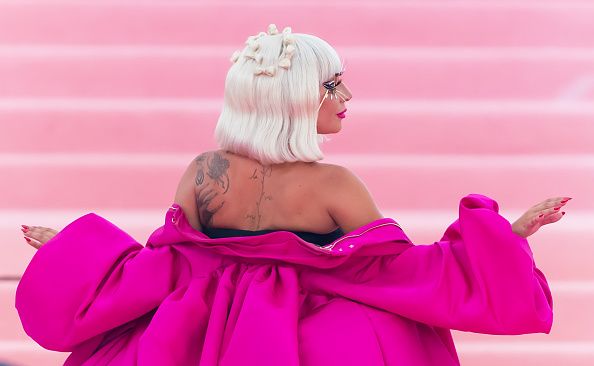 Grande recently took to Twitter to reflect on her experience of working with Gaga: “one time ….. i met a woman who knew pain the same way i did… who cried as much as i did, drank as much wine as i did, ate as much pasta as i did and who’s heart was bigger than her whole body. she immediately felt like a sister to me,” wrote Grande on her official Twiter page. “She then held my hand and invited me into the beautiful world of chromatica and together, we got to express how beautiful and healing it feels to mothafuckinnnn cry ! i hope this makes u all feel as uplifted as it does for us both. i love u @ladygaga, u stunning superwoman !”