Paris Fashion Week’s Haute Couture shows have officially ended for this season, and Fendi definitely delivered everything we were expecting and more. With the surprise presence of Demi Moore as a model, plus numerous other familiar faces from the ’90s as well as more recent ones strutting on the catwalk, the Maison gave the public a lot to talk about.

Inspired by the Bloomsbury Group, an association of English philosophers and artists from the early 20th century, this was Kim Jones’ catwalk debut with Fendi. Demi Moore opened the couture show as a complete surprise to the public wearing an off-the-shoulder black silk suit featuring wide-legged pants, combined with elegant statement earrings and a clutch bag. In fact, her surprise appearance in the show was her debut on the catwalk. 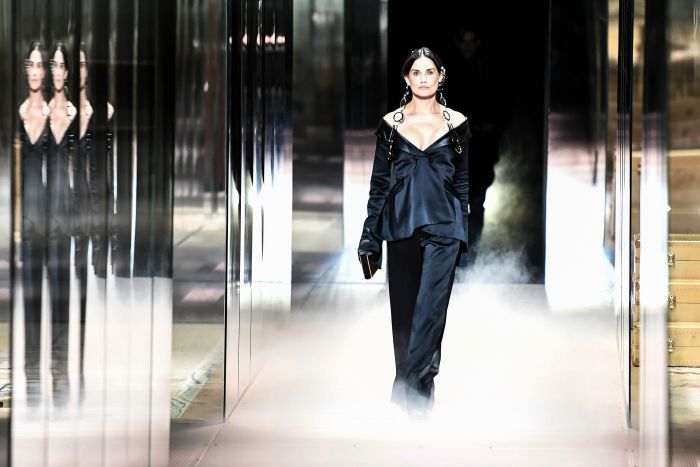 However, the actress’s cameo was not the only highlight of the highly-anticipated fashion show. For Kim Jones’ Fendi debut show, Kate Moss modeled alongside her daughter, Lila Moss. The young model appeared in a sheer caped gown adorned with silver beads, followed by her mother, who wore a gunmetal gray gown embellished with delicate decorations around the hem combined with dramatic drop earrings in the same hue. Other ’90s supermodels made an appearance at the show: Naomi Campbell, who closed the show in a hooded metallic floor-length silver cape dress, reunited with supermodel Christy Turlington for the event. Besides, current favorites Cara Delevingne, Bella Hadid and Adwoa Aboah made an appearance as well. Cara wore an elegant matching set of silver high-waisted pants and a beaded jacket, combined with dramatic earrings. Bella Hadid sported a black floor-length dress combined with a sheer cape that cascaded throughout her chest and down her back, while Adwoa Aboah wore a stunning asymmetrical beaded dress with a jacket sleeve and cape.