Apollo 11 Astronauts Were Quarantined For Weeks

It’s been over 50 years since astronauts Neil Armstrong and Buzz Aldrin took those historic first steps on the surface of the moon. Since Apollo 11- the first manned mission to land on the moon- many things has changed. Nowadays, no one is even taking a step outside their front door due to the widespread pandemic gripping the world. Interestingly enough, the astronauts aboard Apollo 11 were locked away for 21 days after returning to Earth. Not many people know that the pioneering astronauts were kept in quarantine amid fears of ‘moon plague.’ NASA feared that the moon had extraterrestrial microorganisms that were dangerous to humans. “There was lots of debate and fear” Judith Hayes, chief of NASA’s Biomedical Research and Environmental Sciences Division, told the Houston Chronicle. “There was a big public outcry, and people were concerned.”

In response, as soon as the Apollo 11 Command Module Columbia splashed into the ocean, U.S. Navy decontaminated the shuttle with iodine and threw BIG (Biological Isolation Garment) suits into the capsule for the returning astronauts. The first people to ever walk on the moon were sprayed with bleach and flown immediately straight to an isolation unit. Armstrong, Aldrin, and Collins spent 88 hours in a 35-foot Airstream trailer on the USS Hornet, which NASA called the Mobile Quarantine Facility. The trailer had six airplane seats, a small table, and bunk beds. President Nixon greeted the astronauts on the day of their landing along with the astronauts’ wives. There was even a ceremony and cake held just outside the trailer’s window. 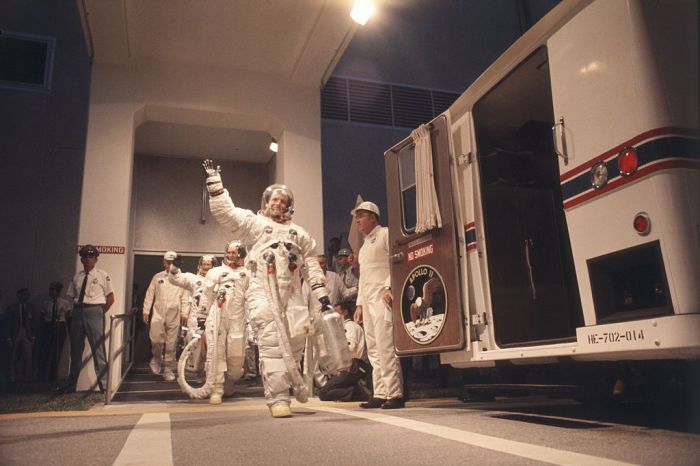 After the astronauts’ time aboard the USS Hornet, the entire Mobile Quarantine Facility was flown to Texas and put into what NASA called the Lunar Receiving Laboratory (LRL). The astronauts then spent 15 more days in the LRL. Everyone who worked in the LRL had to shower and be disinfected at the end of their work shift. Eventually, after both phases of quarantine, the astronauts were cleared by NASA’s surgeon. On August 10, 1969, they were finally allowed to go home to their families. That was nearly a month of quarantine.

Before coronavirus, it would seem virtually unimaginable to spend time in isolation for an extended period of time. And some of us also have similar experiences as the astronauts. “The unit was comfortable, but there was little to do and nowhere to go, so we got bored in a hurry,” said Buzz Aldrin in No Dream Is Too High. They would eat, play table tennis, exercise, undergo daily medical examinations, and get debriefs from NASA. Neil Armstrong spent time playing the ukulele and celebrated his 39th birthday in quarantine.