Since its foundation in 1921, Gucci has become one of the biggest names in the fashion industry. The history of the fashion house begins in 1897 when Guccio Gucci arrived in London to work at the high-end Savoy Hotel. Surrounded by wealthy clients, Gucci learned everything about their tastes in fashion and traveling. Then, for the next few years, young Guccio Gucci worked for an upscale rail company and later for a fine luggage manufacturer.

In 1921, the businessman bought his own store in his hometown of Florence, Italy. There, he started selling imported leather luggage and soon began selling his own leather goods made by local craftsmen. Eventually, Gucci had to acquire a larger workshop to house his 60 artisans. In 1935, when leather became scarce in Italy, the designer saw an opportunity to introduce other fabrics to the composition of his products. It was then that the brand started using materials such as raffia, wicker, wood, linen and jute. It was also around this time that two of the Maison’s signatures were created: the Rombi motif and the cuoio grasso process. In 1937, Gucci launched the brand’s first handbags. 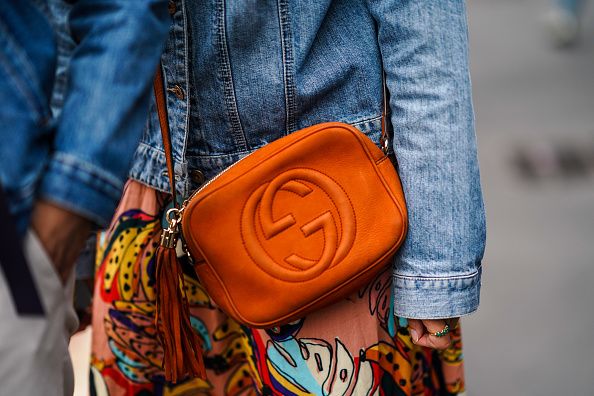 For the next few decades, the company continued to make history with numerous iconic pieces. The Bamboo bag was introduced in 1947, the Gucci loafers were launched in 1952, and the double-G logo was introduced in 1964. The Flora scarf was designed for Grace Kelly in 1966. The company’s first perfume, Il Mio Profumo, and its first watch, Model 2000, were both introduced in 1972. Recently, as a celebration of the brand’s first century of existence, Gucci launched the Aria collection inspired by Tom Ford and Balenciaga.